Joseph's birthday was on Monday. He had been counting down the days for nearly two weeks. The fun all started on Sunday when the Primary sang to him and spotlighted him. He had been looking forward to that all year.
First thing Monday morning he wanted to open his presents. Here's his loot - some awesome kid-sized (real) tools, a tool box, a dinosaur encyclopedia, frisbees, and tons of play dough. 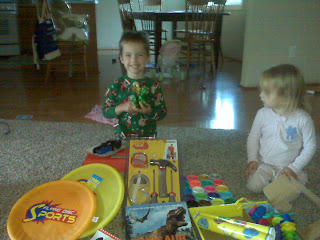 That morning was also his (and Sarah's) first day of swim lessons. They are true beginners in the "Tadpole" class. Joseph was really excited about going to swim lessons until his teacher made everyone jump into the pool to get started. After much coaxing, both Sarah and Joseph finally jumped in with just a little help. [By Friday this week, they are fearlessly jumping in by themselves, so we've seen a lot of progress]. 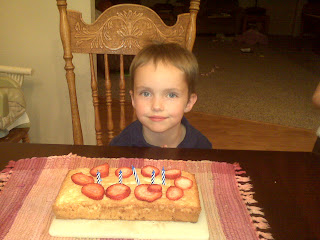 This is what Joseph chose for his birthday cake. It's Angel Food cake and we served it with whipped cream and lots of strawberries. I just didn't want to get wax all over the cream and strawberries during the birthday candle extravaganza. We succeeded in keeping the whipped cream wax-free, but the inside of the cake had to be completely cut out. It was still too hot when we put the candles in, so they melted like butter. Joseph had the hardest time blowing out his candles--he just couldn't aim his air stream at the flame. It was super funny to watch! 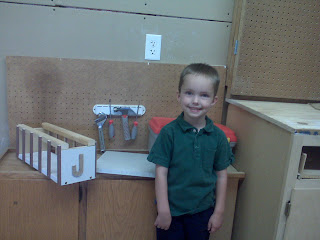 Joseph has been asking for a crib for his little blue doggie for at least a year now. Both Sarah and Kathryn have doll cribs, so he thought that his doggie needed one too. We told him that we'd "get" him one for his birthday. So, using the tools he got from Grandma and Grandpa Wiseman, he worked all afternoon with David out in the shop building this little crib for his doggie. David made the saw cuts, but Joseph did most of the hammering and helped with measurements. Yesterday he and I primed and painted it. It's now red and he adores it.
Some things that Joseph is interested in these days:
1. Reading - he can read most words in simple children's stories. He enjoys reading signs and labels wherever we go.
2. Dinosaurs - he is fascinated by them and wants to learn all about the different species. The encyclopedia he got was just up his alley.
3. Riding his bike (without training wheels) and playing at the park with friends.
4. Learning about different countries while coloring each country's flag. So far he has completed all the flags from North America, South America, Europe, and Africa. In fact, he just loves geography in general. I think he could locate and name more countries at the age of 4 than most high school graduates.
5. Singing - all of our kids love music and singing. At Primary the music leader challenged the kids to memorize the "book" songs. (They're songs that teach the names of all the books in the Old Testament, New Testament, and Book of Mormon). Joseph practiced everyday and in only a few weeks he had all three songs memorized. He was one of the first kids to complete the challenge. (Sarah is very close - she has memorized two songs and probably knows the 3rd one 90% of way).
6. Helping Mom around the house. Joseph is usually very willing to help with different chores and tasks around the house. Of course, he has his grumpy defiant days too, but overall he's such a good boy.
Here is the post about his birthday last year where I posted pictures of him over the years. You can look back at them if you like (just click on the word "Here" at the beginning of the sentence).
at 6:05 PM 2 comments: