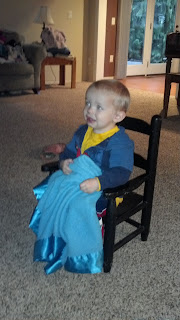 This is how he gets cozy when he is watching a little movie.
He pulls up his special chair and arranges his favorite blanket (aka "deet-deet") on his lap every time. 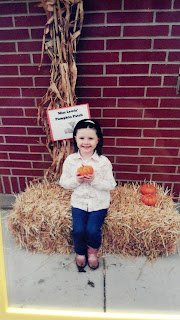 Sarah's fall festival picture. She is wearing all of her "cowboy girl" gear from Grandpa:
Wrangler shirt and jeans and pink boots that light up. 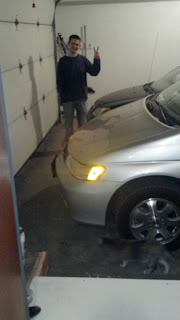 When we bought our house last year everything was set up for wheelchair access. There was a really nice ramp in the garage that made it easy to move in. But, it took up too much space. When the weather got cold, David decided that he was tired of scraping ice off his car every morning. So, he took out the ramp (it was no small task) and built two steps in it's place. Now, we can fit both vehicles in the garage! 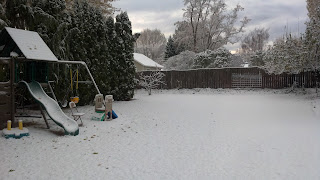 Our first (and only-so far) snowfall of the year. 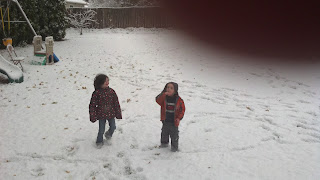 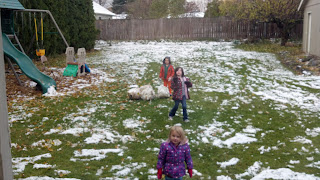 They rolled giant snowballs to make a snowman, but I wouldn't go outside to stack them. 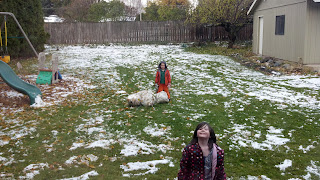 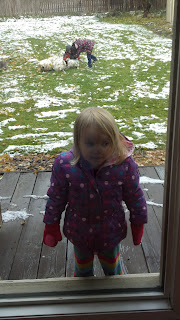 In fact, I took all of these pictures from inside.
Yeah, I'm wimpy about the cold like that. 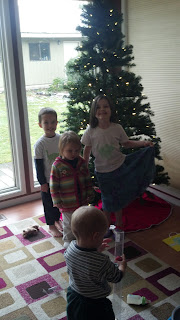 We set up the tree the Monday before Thanksgiving because
Grandpa and Grandma Wiseman were here. 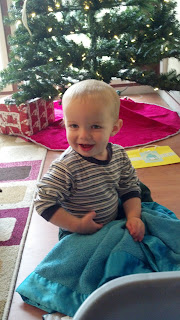 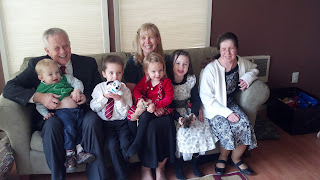 We had so much fun when Grandpa, Grandma, and Laura came to visit! 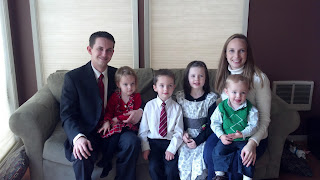 We even got a semi-decent family photo out of it. =) 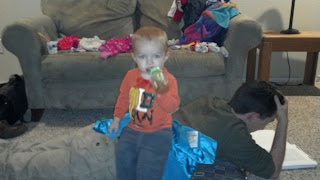 David has some amazing concentration skills.
He's doing some editing while little Davey uses dad for a chair. 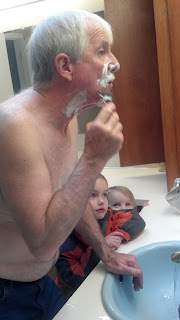 When Grandpa Chuck came for Thanksgiving he showed up with a full mustache and goatee. Kathryn thought he was scary and didn't believe he was the same Grandpa that she played with at the lake this summer. Then he shaved it off--they enjoyed watching that--and she declared him to be her real Grandpa after all. 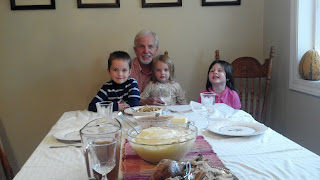 Thanksgiving dinner (Grandpa with a goatee). He made some awesome potatoes, turkey, stuffing, and pie. I made a sweet potato casserole and attempted to make rolls again (failed). 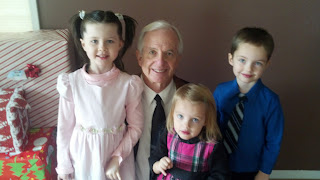 Sunday morning before church (sans goatee), right before he left. The kids and I all loved having family come visit for the holiday. It was so nice to have the extra help around the house. The kids enjoyed playing games with their grandparents and sharing their talents (they were constantly drawing pictures for them or singing songs they had learned).

Blog trivia: how many times did you spot Davey's blanket in various photos in this post?